Methamphetamine gets attention for its extreme and negative effects on the human mind and body, but one of the commonly overlooked complications of frequent meth abuse is the development of anorexia, a symptom and disorder characterized by undernourishment and an unwillingness to eat.

How Meth Can Foster An Eating Disorder

Many overweight individuals seek the aid of stimulants as a means of losing weight quickly. While usually in the form of coffee or over the counter weight loss drugs, some may seek illicit substances that they believe will allow them to drop the weight easier or faster. In this way, individuals predisposed to developing an eating disorder are also correlated with a predisposition to stimulant abuse.

Similarly, most meth abusers seek the drug for its euphoria-inducing qualities, possibly to counteract a number of psychologically distressing symptoms. Users may seek the drug to override persistent depression, to forget a particularly bad memory or to overcome problems of confidence.

Using methamphetamines on human test subjects is considered cruel or unethical in most scientific circles. Instead the majority of meth-related studies are performed on animals.

One study, done in rats, studied the long-term effects of consistent large doses of meth. Researchers noticed significant drops in body weight in nearly all of the test subjects, a physiological symptom shared by their human counterparts. It rules out the earlier possibility of a psychological correlation, since body image is not an issue in rats, but the severe weight loss indicates a clear loss of appetite directly stemming from meth use.

Another study, done in fruit flies, sought to determine the effects of meth on an organism's feeding behavior, respiratory rates and activity levels. The study indicated that in addition to locomotor impairments, the flies' food consumption decreased by 60 to 80 percent. Researchers also found very low levels of triglycerides and glycogen, which indicated a negative caloric balance in the body.

Effects Of Meth Mouth On Appetite

"Meth mouth" is a symptom of long-term methamphetamine use, characterized by rotting, discolored or broken teeth. The drug causes the salivary glands in the mouth to almost completely dry out, at which point the acids in the mouth eat away at the tooth enamel and cause the decay.

This is complicated by the usual hygienic neglect that is symptomatic of meth abusers. Meth mouth in itself can cause a lack of appetite or unwillingness to eat, due to the dry mouth or the pain of rotting teeth.

The correlation has been observed in humans, and proven in animal tests. While part of the correlation is due to a common psychological predisposition to both meth use and eating disorders, the physiological effects of meth can lead any person to a dangerously reduced appetite. 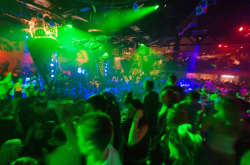 Currently Reading
Understanding The Association Between Meth And Anorexia